The husband and I both have been to London but we didn’t go together so this weekend was our chance to experience London together.  Our plan was to see a few sites in between eating and drinking.   I was in London in June 2017 and just realized I didn’t blog the trip so I am going to mark my planner to do a full blog of those photos since I didn’t do a lot of touristy pictures this time.  Keep an eye out for that blog post coming soon.

I have always heard the food in England is bland and not very good, I have to disagree in a big way.  Perhaps those with that opinion just weren’t going for the right food. 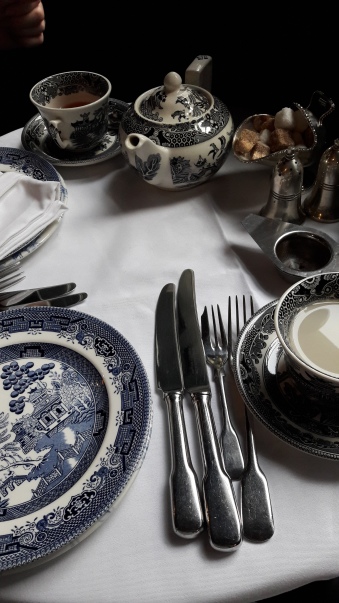 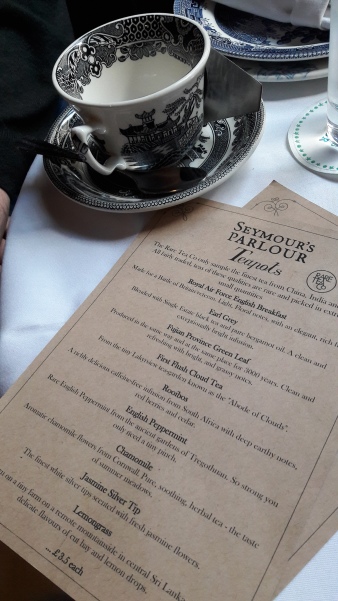 We landed and checked in to our hotel and our first stop was the afternoon tea reservation at Zetter Townhouse where there was a wedding reception going on in the bar which was fun to watch.  After tea we strolled Hyde Park and the Diana Memorial Fountain but it was closed for maintenance.   Dinner was at my favorite pub so far, The Victoria where I had a beautiful beef and Stilton pie and the husband had the fish and chips. 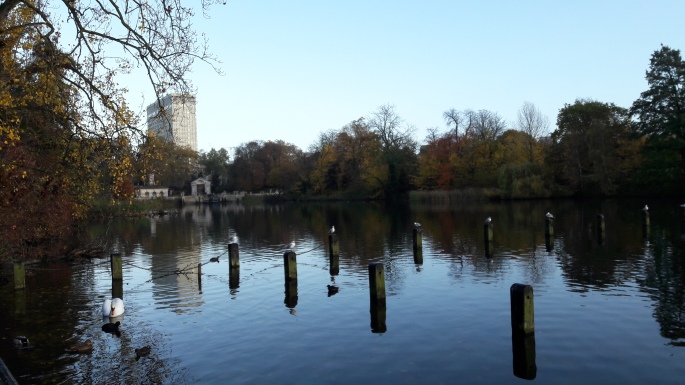 Saturday we crossed Hyde Park and visited the front of Buckingham Palace and upon heading off we were stopped at the road for an official procession of buggies.  Pretty cool, no idea who was in the front but he was waving.

Heading to Covent Garden area which is already decorated for the holidays, it was lovely.  Passed the London Eye and found a Christmas market about to open which we intended to stop by on Sunday but didn’t make it.  In Covent Garden we had lunch reservations at Rules which is the oldest restaurant in London and man it was delicious, the staff were wonderful and the ambience was stunning (but it is a game place so if you have an sensitivity for animals maybe don’t eat here).    We ordered the smoked eel which was unreal.  So good.  Then I had the Curried Lamb Shank and the husband had the Roast Haunch of Venison plate.  They were stunning and delicious.  We ended with sharing a sticky toffee pudding, of course. 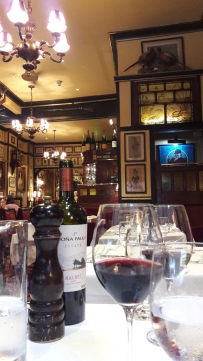 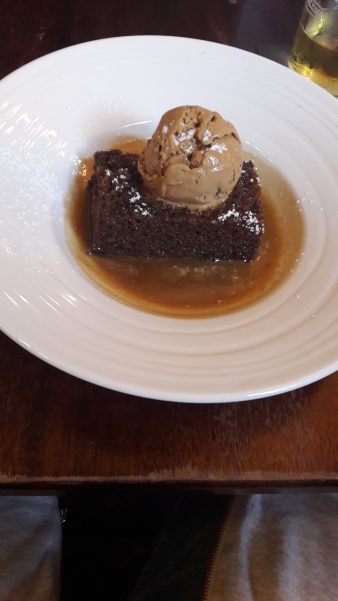 After lunch we walked to Forbidden Planet to have a look around and feed our geeky souls.  Then walked back to The Victoria for our dinner reservations where I had my favorite English plate of sausages and mash.

Sunday started out great with a walk the Sherlock Holmes Museum which I had been to before but the husband had not gone inside.  It’s such a great set up, if you get a chance to go, it’s worth it.  On the way there I twisted my ankle enough to make me pause but continued on after a few expletives and winces.  After the museum we worked our way to Blacklock in Soho for our reservation for Sunday Roast.  It was amazing!  It’s downstairs and as soon as you enter you smell the smokey meat.  Beautiful.  The staff is fantastic and very cheery.  The meat was perfectly cooked, the vegetables were roasted with a char and the yorkshire pudding exceeded my expectations.  This was our first real Sunday Roast and it will be remembered with reverence.

Unfortunately, after lunch I busted my ankle again as we were walking back to Hyde Park and this time it was enough to have me doubled over.   I toughed it out though so we could get in our last actual planned outing for the trip, Kensington Palace.  This is the one tour other than Westminster Abbey (which was closed this weekend) that I wanted to take.  When Lady Diana was engaged to Prince Charles my mother jumped on it and started picking up articles, magazines and such for me.  It was a big part of my childhood watching Lady Diana become Princess Diana and then the heartbreak of the separation and divorce, and the ultimate devastation of her death.  I even have a replica of her engagement ring.  So, stopping in Kensington Palace, where she spent a lot of her time with her boys, was a big deal for me.  Also, a bonus to it was their special exhibit right now is Diana Her Fashion Story where they are showing many of her dresses/suits.  I don’t have the words to describe my feelings at being there so I’ll just say it was worth the ticket price, worth the pain of the ankle, worth the airline tickets and hotel room.  The palace museum consists of the King’s State Apartments, the Queen’s State Apartments and Victoria Revealed which shows some stunning crowns and jewels.   Also, the gardens at the palace are quite beautiful.

After touring the palace I had reached my limit with my ankle so we headed back to the hotel to put it up.  Unfortunately, that marked the end of the trip for us.  I tried to get the husband to go to a pub or something but he insisted on staying with me so we basically got comfy and turned on some British telly and relaxed.  We weren’t even hungry for dinner after such a big lunch.

Monday morning had us heading to the airport and a day of flying.  One bonus to being injured while flying is we were able to pre-board both flights which was nice.  Once back in Naples we drove straight the hospital on base to get my ankle checked.  Just had it wrapped and told to keep it up and take Tylenol.

It will heal and I will be going for physical therapy for it because it is a reoccurring injury (I sprained it bad back in Japan a few years ago too) that the Dr. thinks I can help from happening again.

So, that wraps up our eventful weekend.  Next on the travel agenda: A quick trip to Munich to enjoy the Christmas Markets then Edinburgh for a weekend of intense fun.