Since 2012, the months prior to the move to Japan in early 2013, I have been plotting and planning to have a tattoo done while in Japan.  I wasn’t sure what it would be or where on my body let alone who I would go to for the work.

This was more than a little job.  I was concerned with the artwork, I wanted to wait until I knew exactly what I wanted.  If I found myself appreciating the culture, which I have enormously, then I wanted something to honor the time in Japan.  If I found it more difficult, I would default to a couple of symbols I have on my bucket ink list.

Only after figuring out the above would I be able to know where to place it.  Then I had to research artists in the area to find one I would trust to do great work with a language barrier likely.

Loving Japan was immediate so I knew I would get something Japanese.  It was only after a fellow blogger assigned me a nickname that I had to research when I came across the artwork to inspire my tattoo.  When he said Onna Bugeisha, I had to find out what that was and I was seriously impressed with them.  The artwork by, Yuhime , was this:

I have also appreciated the Ume (Plum) blossom of Japan, it is beautiful and not the over used in tattoo work Sakura (cherry) blossom.  This would also fit incredibly well on my right upper arm with would balance well with my Morning Glory on the left upper arm.  So, I sent the below to the artist to work from:

I went to several tattoo parlors to look at their books and many web sites.  Finally, I decided to go with Fanatic Tattoo in Yokohama and the owner, Karyu-san to do the work.  He emailed me his version and suggested the flowers go on her kimono.  It was perfect. 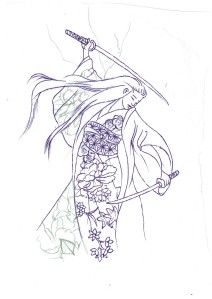 I asked him about the background Ume blossoms and he said he will free hand it.

Last Monday, July 6th at exactly 12:00 noon I checked in to the shop, a nervous wreck to say the least.  Nerves that were anxious, excited and adrenaline.  Four hours he said it would take….FOUR is the longest I have sat.  The Morning Glory took three.

We stepped back to his work station and they only have beds, not chairs so I was to lay down on my left side for it.  This would end up being more of a trial for me than originally thought because of my hip muscle problem, but I was determined.  Lay in the same position without moving for hours, bring it on.

The language barrier only came into play once, I had asked him to wait after the line work is completed so I could take a picture of it before he started with the color and he seemed to understand but three hours in and he hadn’t stopped, I chanced a glance at my arm and saw color.  Slightly gutted that I didn’t get a mid way point photo for the blog but also glad to know we were further than I thought.  The pain level was definitely getting to me after hour three and the further back he went the more it hurt, that under side of the arm is sensitive!

I sucked it up and waited patiently for him to stop and wash me off saying Finished.

Wasn’t quite sure I could stand up to be honest so I tentatively moved and did make my way to the mirror.  Stunned to almost tears.

It’s been a week now and the serious itching started a couple of days ago, it’s starting to get better.  The itching is crazy.  She looks great!  I am so happy with my permanent token of the time in Japan.  So, a big thank you to REDdog, who is currently on a hiatus from blogging, for the inspiration and to Karyu-san for the incredible work.  Biggest thanks go to my husband for appreciating my love of tattoos and finding them attractive…oh and he paid for it.  😀

What a journey this has been.

P.S.  the title is just so my parents can skip this post, they don’t approve of tattoos.

**Edited to add the artist Yuhime and link to the artwork inspiration.

13 thoughts on “Not A Parent Approved Post – New Tattoo”