When we found out we were going to be stationed in Italy I about fell over with excitement and anticipation.  Partly because … Europe!  But partly also because my mother’s side of the family all hails from Sicily – and my dad’s bloodline comes from a humble mining village in the Slovakian mountains, I’m working on that travel plan as well.  More on that side in another blog post.

The Sicilians (Navarra and Castiglione) come from a small fishing village West of Palermo called Castellammare del Golfo.  Upon doing some research and quizzing family for what they know I’ve gathered that some of our family had some ties to the mafia in that area and is the main reason for their immigrating to America.  That’s about all I will say about that. *wink*

With our move to Naples my husband and I knew there would be trips to Sicily over the next few years and he surprised me with planning one for my birthday weekend which conveniently coincided with a four day weekend for his work.  We decided to drive this first time to take in the scenery and to take the ferry across the strait from Reggio Calabria to Messina.  My first time on a drive-on ferry, pretty cool.  It was surprising to me how close the two pieces of land are, for some reason the idea that you can see the island from the coast was crazy. 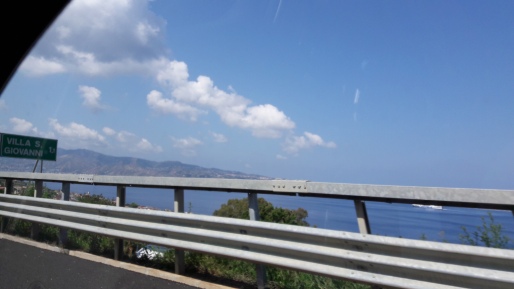 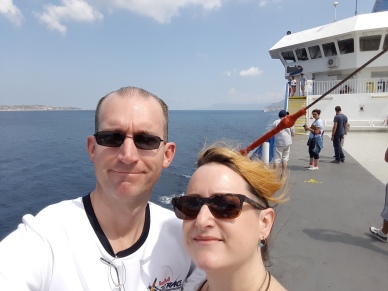 I won’t lie, I was choked up a little going across the water to the island.  Since I was a child the idea of having Sicilian blood was so cool, I romanticized it and probably still do to some extent.  The last photo, the selfie, shows the tip of Italy on the right and Sicily on the left in the background.  We were about half way across.

It took about 5 hours to drive down to the Ferry then about 3 hours to get to our hotel La Battigia in Alcamo Marina which was just a 15 minute drive to Castellammare del Golfo and it’s right on the beach which was amazing.  We checked in and went for a walk down the beach then had dinner at the hotel restaurant.

The next morning we drove over to Castellammare to explore.  Again, a bit choked up that we were there, where my ancestors walked the same streets.  It was a bit overwhelming for me at times.  My photos don’t do it justice. 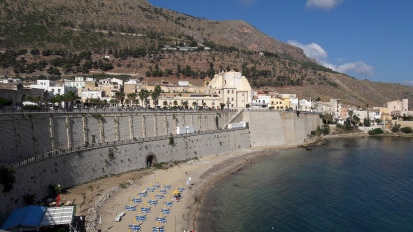 The town is absolutely perfect.  Nestled in a little spot at the bottom of a mountain range and on the Mediterranean Sea with an amazing seawall (photo above), it has kept it’s charm with cobblestone streets, old architecture, beautiful and quaint churches and amazing seafood restaurants.  We were a bit surprised to find Couscous on many menus but the island is a bit of a melting pot of cultures over the ages. 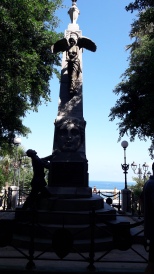 The famous Sicilian Cannoli (photo above) was creamy, decadent and rich. Everything I hoped for and more.  We strolled, we ate, we shopped, we took it all in.

The appetizer plate above came with our drinks for happy hour, it was aperitivo.  Not in the photo was my favorite street food so far in Italy, Panelle which is chick pea fritters and it’s delicious.   The dinner plates were grilled squid and a seafood and saffron risotto.  Both were expertly crafted dishes we will not soon forget.  I also had veal in a pistachio cream sauce that was divine but not very photogenic.

Sunday we decided to go check out Erice which is down the coast in Trapani.  It is a medieval hilltop village which we took a cable car up to.  Pretty cool but admittedly a bit disappointing, I think mostly because it was very touristy, but glad we went. 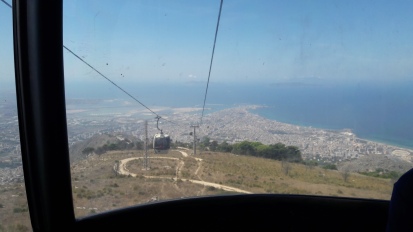 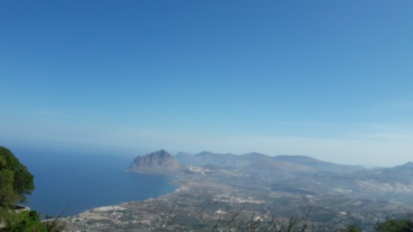 Back to the hotel for some beach time then to Castellammare for dinner then Monday morning we started back towards Naples and reality.

It was a wonderful trip that filled my heart and soul, I am looking forward to going back and to exploring Slovakian roots as well.

We had so many suggestions on places to go visit but my sites were set on Castellammare del Golfo, for personal reasons for this first visit.  Followup trips will be a more touristy jaunt around Palermo and I want to go down to Marsala at some point for some wine.  Of course, we will likely do some Etna viewing too.  There’s a couple of years to work a few trips in.

For those of you planning a trip to the West Coast of Sicily I will push you to take a detour to my little fishing village, I don’t think you’ll be disappointed.