The husband and I decided the first trip to Rome we should drive then following trips we would figure out the train system.  It was I think just under two hours to go from our town to the middle of Rome where we had reservations at Hotel Della Nazioni.  The husband chose this hotel mainly because it seemed quite close to the many sites we wanted to see and had good reviews.

Getting there was another thing altogether.  We used our TomTom (as everyone suggests using gps here instead of maps) and it had us going down a one way street…the wrong way at one point which had one Italian waving his arms at us and I’m sure cussing us out but still the wrong way didn’t get us to the hotel so I cut TomTom off and pulled up my GoogleMaps app and got to work getting us there.  It was a bit hectic and crazy but didn’t take too long before we were making the block around the hotel because there was nowhere to park.  I called the front desk and he said pull up and they will park for us.  Excellent!  We pulled up, the porter came out and direct us to pull half onto the curb…ok.  Then we left the car in his hands and went to check in.  It was a pleasant hotel, nice amenities and has a decent restaurant attached with outside covered patio seating.  Our room was at the top with a small balcony patio large enough for a little patio table and two chairs, we wished we were staying longer to take advantage of that more.  The room was fine, the bed a bit hard but not horrible. 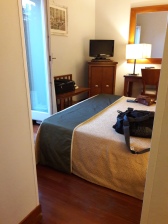 The husband loved the veal meatballs.

I truly enjoyed the pasta with seafood.

Limoncello semifreddo that was divine!

We were just around the corner from the Trevi Fountain  which was absolutely beautiful and were able to walk to that evening after dinner to see it lit up at night and again passed it the next morning on the way to the Colosseum.  (I am linking to the ItalyGuides site because I think they do a nice job of describing the sites, I hope you agree) 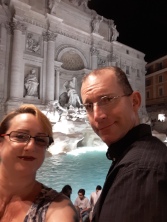 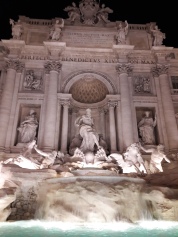 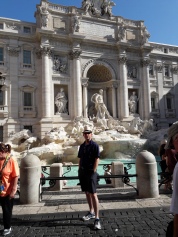 From there we stopped at a corner caffe’ to have the most expensive idiotic but very tasty breakfast ever.  A cappuccino each, one croissant and a fruit cup was 27 Euro…that’s nuts. 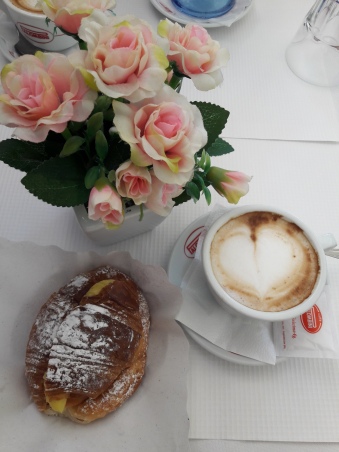 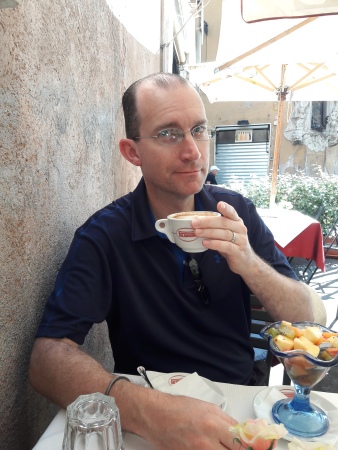 After that beating we took a long walk towards the Colosseum with many sites in between.  We curved up a slight incline to the Palazzo del Quirinale which has a huge courtyard area with nice views and photo opportunities. 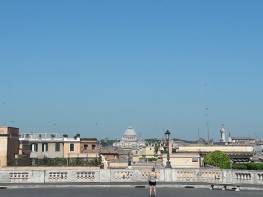 Walking down we passed a building that people were walking through a small gate to go around and thought, why not?  So we did too.  The payoff was huge!  This is now ruins of what was a big market area, Mercati Traiani, between the Quirinale and the Colosseum.  Just past it was a street area with different Caesar statues. 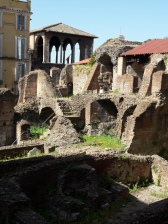 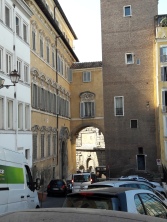 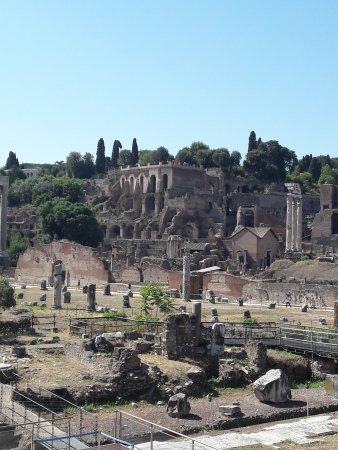 The approach to the Colosseum was amazing, you could see it for much of the last leg of the walk as it got closer the air seemed to become older and kind of energized.   More people and many guides trying to sell their tour to get you in quicker … No line!  Right. Well, we were there this time only to scout the area out so no tour for us.  Next trip we will go inside.  For now, we enjoyed the scenery. 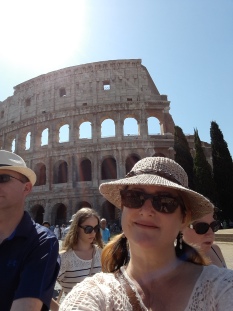 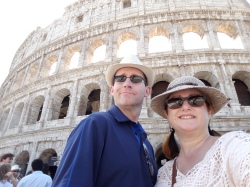 From the Colosseum we walked around the outside of the Palatino and stopped in a bar for lunch and a drink.  Making our way around to a beautiful church where a bride and groom were having photos taken and wound up a hill for even more epic views. 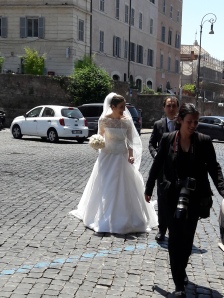 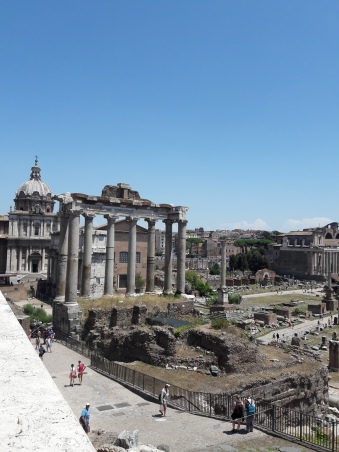 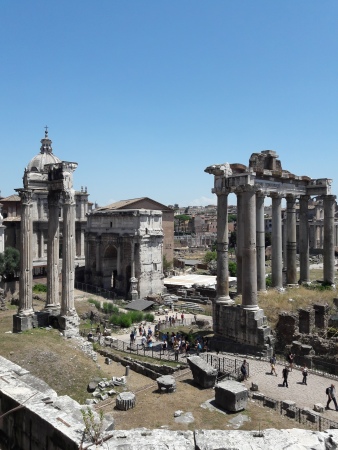 Continuing up the windy hill we were a bit surprised to walk onto the courtyard of the Campidoglio (the Capitol) and it was stunning. 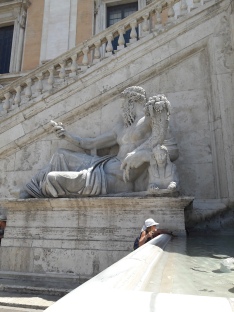 After a long time of walking around this courtyard (we are going back to check out the museums there!) we headed down the stairs and came upon this awesome guy: 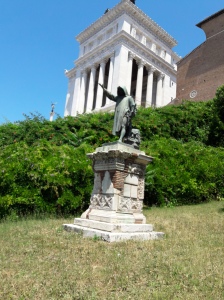 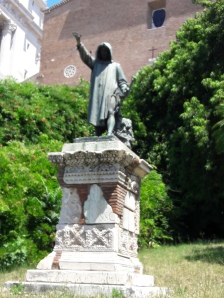 The white columns behind him was where we were heading next, around the corner and up some stairs… 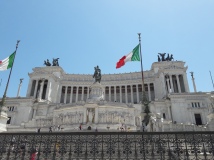 This is Il Vittoriano, a monument that is so large I had a hard time getting the entire thing in one frame while in front of it.  It’s massive, it’s bright white and it’s very impressive.

There is a tour but we just stepped inside the entryway to see what we could see without going through it.  (saving inside stuff for the next trip).

The only site left on my personal to do list was the Pantheon so we wound our way towards it.  Our path had us coming from the backside of it and curving around to the entrance which I have to say was a great way to experience it.  The front was everything I hoped it would be.  Massive, impressive, gorgeous. 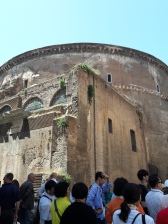 The back of the Patheon 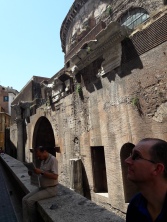 Curving around the side, we took a break on the wall in the shade.

The side and first glance of the front. 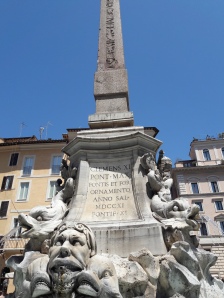 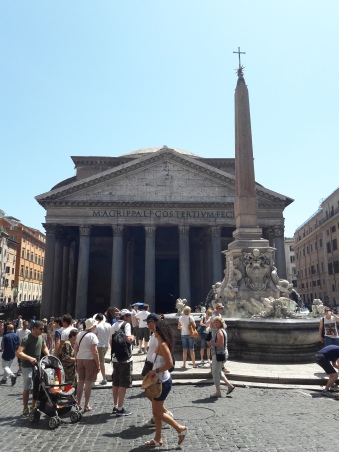 The inside of the Pantheon was free admission and no lines so we went in and I did get some photos but they don’t do it justice.  A side note that I thought was kinda cool is Rafael (painter) is buried there. 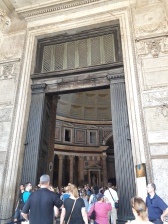 It was mid afternoon at this point and we were fairly tired and hot so we decided to return to the hotel and rest up a bit then venture out later for dinner.  One of our stupid things is when in a new city that has one we tend to make it a habit to dine at the Hard Rock so we walked the other direction from the hotel and explored mostly shopping and restaurants on the way up.  This was a more upscale area and was quite pretty but it was dark and I was apparently done with photo taking at this point so I don’t have many photos from the evening.  After dinner we went for a quick walk down the main road of Villa Borghese which is a huge park with museums and such.

That about finishing up our trip to Rome.  We turned in and decided the next morning to drive back early to get ahead of the traffic.  The day before was so packed we were pretty satisfied with our first day trip to Rome.

Next time, Vatican City area.  Another time we will return to see some museums and inside Villa Borghese during the day, there is a Temple of Diana in there I just need to have a moment in.

Coming up… I am getting a little car this week so I’m hoping to start incorporating some local exploring though August is a hot month here and apparently Italy goes on holiday for the month so it might wait till September.  Update on August get out of the heat possible trip, probably not doing that at this point so right now our next trip is Sicily in September where I get to explore the area part of my family ancestry is from.

(Just a note…we walked the entire day and saw so much.  It was fantastic to be able to do so much without having to drive, train, etc. to get around.  Which is why we are organizing our trips to Rome by section.)

13 thoughts on “First Trip to Rome”