So, a blogger I follow REDdog is from the very awesome Australia and recently posted about how Aussies use nicknames for everyone.  Too intriguing for me to pass up because I have never really had a nickname.  Sure some people have used Di or Diane (which isn’t shorter so not sure why that works for some people) but nothing as fun and stupid (in a complimentary way)  as the Aussies take it.  Nicknames are an art form there, truly.  Read more here.

I have had to create names for gaming reasons so was used to being called my game name by other gamers but can’t really go with that, just lame.  So, I was a little sad at not having a nickname, and secretly a little glad because some of the nicks are just not complimentary. haha!

Then he bestows me with this…

Alrighty then! So you’re a bit of a maverick eh Di, strong willed yet self-deprecating (always a favourite combo). You live unburdened, by western standards, and prefer the wings to the spotlight. There is more to your love of Japanese culture than meets the eye, it resonates in you, not just with you, and I suspect you would make references in normal conversation enough to get the attention of your mates states-side when you get home. So I’m thinking your nickname should reflect your loves as well as your personality disposition. Female Samurai comes to mind, the Onna Bugeisha. Of course, that’s too much of a mouthful after a big night on the saki, so as is our Aussie way I’m thinking you would soon be getting the eclipsed version, which I reckon would be either Onna (woman*) or Bugeisha (warrior*) further reduced to “Buggy”. Personally, I like Buggy because of it’s built in mystery and irreverence for it’s origins…so, welcome aboard Buggy!

Not the most feminine or elegant name but there it is.  A valiant effort by the man in characterizing me after only giving him a little information.

Don’t think I’ll start introducing myself as Buggy though mate.  That’ll get an eyebrow lift.  If that sticks I’ll be amazed, specially as it was dubbed online.  Good luck. 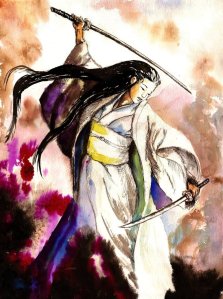