The last two and a half months have been interesting.  With returning to America we knew there would be a lot we would be upgrading, replacing and adding to our lives.  So, we saved for it and at this point I think we are about finished and have managed to remain debt free.

While overseas we had to scrap the motorcycle because of rust and other issues that took it over, and we passed the truck on to my step-son. So, just before leaving Italy we ordered a new, 2020 Ford Ranger to be built while we were moving back.  With a few snags along the way, idiots not getting the order in or right and such, it’s still in production now.  Of course, with much of America (and the world) in shut down right now we are guessing the plant is closed down as well, so another delay.  No worries though, we have our Mustang to use so it’s mostly an inconvenience and just a gift to ourselves that we can’t open yet.  When/if I find employment, it may become more of an issue.

The guest bed needed replacing first since my step-daughter was likely to visit often as she is not far away.  We picked up a frame from Ashley Furniture that we really like and got the guest room set up, and yep she has already broken it in.

We knew we wanted to upgrade our t.v. as well, so we now own a smart t.v. with a larger screen and a Bose sound bar.

Also, on the list was a new BBQ grill.  We scrapped ours when leaving Italy and upgraded a bit with the new one.

Next up was replacing the motorcycle.  The husband knew exactly what he wanted and started searching for it outside of California.  We found a dealership we liked in Tucson and placed the order for a 2020 Indian Dark Horse.  Just picked that up a few weeks ago and Sunday I finally got on the back seat and we went for a ride.  With San Diego on stay at home orders, we have been very good about not going places where others gather but I do walk often for exercise and the motorcycle has been a great way to get out but not around others.  And it was a GREAT ride.  My backside will need to get used to it again but for the first time in 7 years it felt pretty great to back on a bike. 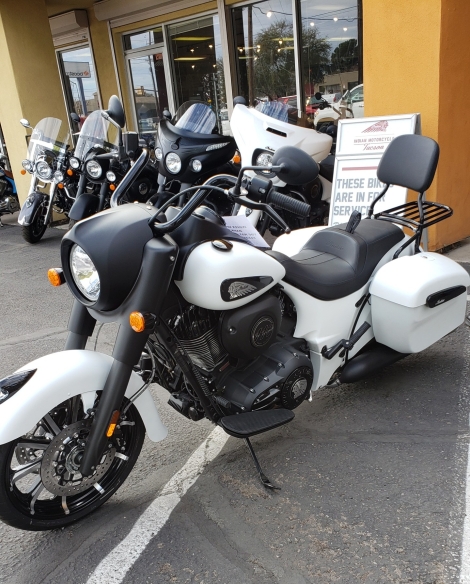 I also picked up new glasses, we both were fitted for and got new running/walking shoes (which have gotten so expensive!!!)  and we have a few other smaller items still to get but not urgently like a slow cooker and maybe an air fryer.

Now, we are back to saving again which this lock down is kind of helping with since we aren’t out spending money at restaurants or stores and we haven’t spent our last dollar hoarding toilet paper like it’s the commode apocalypse.

Stay safe out there people and don’t be an asshole.

3 thoughts on “Getting Back Into It”