When friends and family heard we were going to live in Japan for 3 years I had a mixture of reactions.  Most were super excited and some said they would make the trip to come visit.  Then there were a few who cringed and said “Eww Raw Fish!  I would starve to death in Japan!”

To the person who can’t see past the sushi, I submit this post in hopes of opening your eyes to the magical world that is Japan.

Japan is a hub, specifically Tokyo of course.  So many cultures converge for business and industry here that restauranteurs have sprung up to provide an incredible array of food choices.  Some have created authentic food from other countries and others have brought the Japanese spin to those foods.

1.  I would be remiss if I didn’t speak of Italian first.   There are a bunch of Italian or Japanese style Italian spots all over this country.  I have enjoyed wonderful Bolognese and fantastic seafood pasta dishes.  The spin Japan has put on Italian food is their interpretation of Pizza and Spaghetti.

Pizza tends to have mayonnaise and often very different toppings then you would expect.  From seafood to corn.  I have tried a few different styles and they are very interesting.  Some I can do without but they have mastered the art of flavor.  I may not like mayo on my pizza but I get the reason why, it oddly makes sense.  If odd pizza isn’t your thing, you can easily find an American style pizza on many a menu.

The Japanese spin on spaghetti is a bit of a stretch but it is very popular here.  They call it Neapolitan, the sauce is made of ketchup and not much else.  This has had me chuckling for 2 years.

I will admit that I haven’t tried this yet.  Being part Sicilian, it just seems wrong.  I will order it before we leave.

Oh, one thing about Italian eating here, they almost always have Tabasco on the table.  *shrug* I don’t get it either.

2.  Our second happy find in Japan are the plentiful English, Scottish and Irish Pubs that have become incredibly popular.  We do run into a lot of people with such accents so Japan is definitely a draw from that side of the world.  The pubs often have good pub food and a pint of Guinness is not difficult to find here.

3.  Peruvian, yes I said that.  There is a fantastic Peruvian restaurant within walking distance of the base here and it is out of this world awesome!  From seafood soups to beans and rice and great stir fry type dishes.

4.  French Patisserie – In almost every department store in Japan there is a grocery store level and a patisserie.  The French pastries are amazing and the Japanese put some unusual but often spectacular spins on them.  Just want to grab a bite or a breakfast you can grab and go?  Stop at a patisserie and grab some tongs. 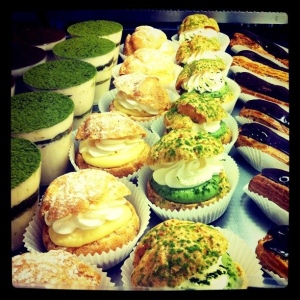 The variety is fantastic and the prices are reasonable!

5.  Filipino – Being so close to The Philippines, it’s natural there are some wonderful options in Filipino food.

6.  Mexican – Ok I am a little biased on Mexican food in that I grew up in Tucson, Arizona so I will say so far the Mexican food I have found here is ok, not great but it curbs the craving enough.

7.  Cajun/Creole – Again I am a little biased because I’m married to a Cajun so I have been introduced to the good stuff and often.  To the untrained pallet the couple of Cajun restaurants we have found would be great and truly enjoyable.

8.  American – as in, hamburgers, hotdogs, steaks, etc.  Easily found here, the Japanese have mastered the hamburger and they will put just about anything on a hotdog bun, even sometimes a wiener.

9.  What I will call Couture food – the upscale, classy, small portioned and well finessed bites of awesomeness.  Being such a mecca has brought in some of the world’s finest chefs.  We have run across some absolutely stellar food in the least likeliest of places.  Small Izakaya’s (Japanese bar) will often have a menu that will put a smile on my face. 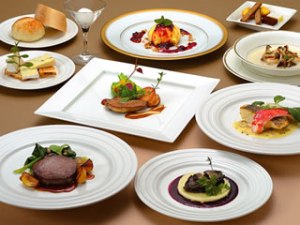 Well, there you have nine options, so I don’t want to hear that you don’t want to visit because you won’t like the food in Japan.  🙂

10. Wow, I almost closed without even mentioning the Indian Curry.  Shame on me! 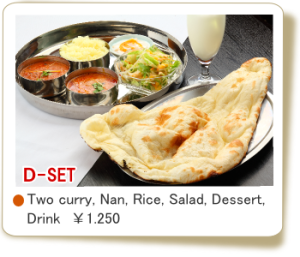 Truly blissful curry!  We tend to visit one of the curry places in town at least a couple times every month, often more than once a week.

The Japanese have a curry as well and it’s very different but just as yummy!

I hope this post has opened your eyes a little to the wonderful cuisine of Japan.  All it takes is a google search or a walkabout to find an adventure in food.