I was in a cooking competition with about 10 people, split into two groups.  The kitchen for each was set up on either side of a counter and each side had a celebrity chef assisting.  Emeril and Robert Irvine. 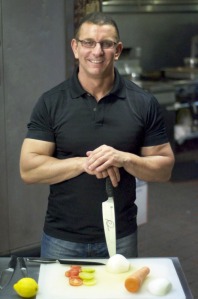 At first I thought I was going to Emeril’s side but secretly hoped for Robert’s.  Then in a crazy turn I ended up with Robert.  He had prepped a fish and meat dish that we just had to add our own dishes to make a meal with options.

Robert was so nice, he showed me what he made and where it was in the ovens then he took a back seat, per the rules.  He couldn’t help anymore.

We cooked, prepared other dishes.

It was 5 minutes till the end of our time so I checked the fish and meat…Oh No!  It had not cooked, I didn’t realize Chef Irvine had not turned the ovens on, he just prepped the food!!!  This was going to end us, we failed…because I didn’t realize the ovens weren’t on in the beginning.  There was no way they would cook in time.  We were going to serve raw fish (not sushi grade) and raw beef fillet which had been seared but was still blue inside.

Chef Irvine had his look of disbelief and actual pity.  The team was mortified.

Then I woke up…